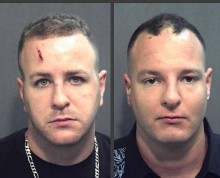 Craig Sandhaus, the man charged in the downtown Orlando slaying of bouncer Milton Torres, was in court Friday hoping to have his confession thrown out of the murder case.

Circuit Judge Alan Apte didn’t rule on the issue during Friday’s hearing. Trial is currently set for May 20.

Torres, 25, was stabbed in a conflict with the Sandhaus brothers May 7, 2011, outside The Lodge. Eric Sandhaus was initially arrested in the stabbing, but was let go after Craig Sandhaus confessed.

But Craig Sandhaus’ new lawyer, Eric Barker, argues the confession only happened because previous defense counsel Eric Schwartzreich had a conflict of interest: He was representing both brothers.

Sandhaus’ defense called on two attorneys not associated with the case, Michael Dicembre and Warren Lindsey, who testified the brothers should not have shared a lawyer.

“I would have had concern immediately with representing both parties,” Dicembre said.

Later, Craig Sandhaus testified that Schwartzreich never brought up the conflict of interest before advising him to confess.

“He basically told me to answer all of the questions that the detectives had for me and to be truthful,” Craig Sandhaus said. But he admitted that, at the time, he called the confession “solely” his decision.

Orlando police Detective Michael Moreschi also testified that Craig Sandhaus described the confession as his own in 2011.

After the testimony, Barker described Schwartzreich’s approach as inexcusable: “I don’t think there can be a more obvious or clear conflict of interest than we have in this case,” he said.

“He sold out one client for another,” Barker said.

Countered prosecutor Ken Lewis: “This is clearly a case of confessor’s remorse.”

Lewis argued the confession was voluntary: the result of Craig Sandhaus’ guilt that his brother was behind bars, not bad advice.