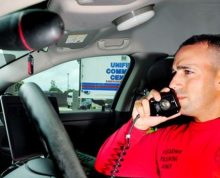 (via WFTV) BREVARD COUNTY, Fla. – A former deputy charged with murder and attempted murder is out on bail.

Some family members of the man killed aren’t happy about it.

They said it’s not just about the suspect’s $60,000 bail amount, it’s how some of them found out about it.

“To us, a murderer is out on the streets right now,” said Lamar Coaston, Clarence Howard’s uncle.

Howard, 25, was shot and killed on Father’s Day in what Palm Bay police describe as a road rage incident.

“My issue is he fled the scene of the crime. To me, that considers him as a flight risk and the bond amount. There are people being held for lesser crimes with no bond,” Coaston said.

Hafza is charged with the death of Howard and the attempted murder of Jose Montanez, who was with the Howard at the time of the shooting.

A bond hearing was scheduled for next month, but the State Attorney’s Office said prosecutors were approached by Hafza’s attorneys about a bond agreement that would give the state more control over release conditions.

Hafza was forced to surrender his passport, wear a GPS monitor, and he must not possess any weapons and has to stay out of Brevard County.

“I have to visit my fiancée at a cemetery with our three children. I’m shocked that he’s out,” said Jessica Montanez, Howard’s fiancée.

The lead prosecutor on the case shared a statement with Channel 9 that said, in part, “Bond was made with the support of Jose Montanez, the mother of Clarence Howard and the law enforcement officers who investigated the case.”

“We have a strong faith that God will get us through this and we’ll come out victorious,” Coaston said.

The State Attorney’s Office also said the bond decision was made with the goal of retaining control over the issue. Channel 9 was told the defendant could have been released on a smaller bond amount with none of the conditions that were negotiated.