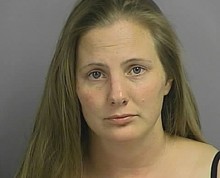 ST. CLOUD — Less than a month from going to trial, the murder case against Kathryn Raver in her husband’s 2007 shooting death ended last week without notice or fanfare.

On Friday, the Orange-Osceola State Attorney’s Office released a one-sentence response to questions about why it dropped the prosecution Wednesday after two years of depositions, accusations and hundreds of court motions.

“The charges against Raver were dropped as part of a long term strategy,” the office said in a release.

The state’s decision to drop the case surprised Orlando attorney Eric Barker, who had been preparing to defend Raver at trial April 4.

Besides facing a first-degree-murder charge, the 37-year-old widow had been accused of forging her husband’s signature days after his death to remove more than $105,000 from their joint investment account. Prosecutors dropped that case Thursday, a day after the murder charge.

Bradley Raver, 43, died Sept. 27, 2007, from a single gunshot as he slept in the couple’s home on Carolina Avenue near downtown St. Cloud.

Police quickly arrested Charles King, an employee of Raver’s roofing company, who told detectives he acted alone when he killed his boss to stop him from abusing Kathryn Raver. After being sentenced in 2009 to life in prison, King changed his story.

King told prosecutors that Raver called him to her home after the killing and gave him a pistol to throw away without telling him that she had just murdered her husband, according to court records.

Cell-phone records show King and Raver spoke nine times to each other between midnight and 4:30 a.m. on the morning of the killing. Police said Bradley Raver died about 4 a.m.

Evidence to have been presented at the canceled trial included testimony that the Florida Department of Law Enforcement found gunshot residue on clothing Raver wore the night her husband died. She previously told investigators she had not fired a gun in quite some time. Gunshot residue is scattered within 3 to 5 feet of a gun when a cartridge is fired.