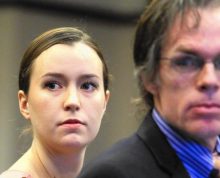 The woman responsible for the hit-and-run crash that killed a 17-year-old girl and severely injured her 18-year-old brother in 2013 will spend one year and one day in jail, officials say.

Kila Holland, a graduate of the University of Central Florida, was sentenced Monday. She pleaded no contest to a charge of leaving the scene of a fatal crash.

Court documents say Exposito was riding a bike with his sister standing behind him on foot pegs that were attached to the bike. The siblings were riding together and were not in the crosswalk at the time of the crash, according to Florida Highway Patrol.

The day after the crash, Holland — a UCF student at the time — went to FHP with a lawyer and told troopers where they could find her car.

One week before she was sentenced, Holland’s attorney filed a memorandum requesting a lighter sentence, citing that not only did Holland cooperate with the investigation but this was an isolated event for which Holland was remorseful.

Ddec. 6 marked the two-year anniversary of the death of Melanie Exposito, who was riding on a bicycle with her older brother when a vehicle slammed into them and drove off.
Prosecutors however argued against those points and questioned if Holland was truly remorseful.

Holland “did not care about the persons she struck with her Mercedes Benz as evidenced by her actions,” Assistant State Attorney Michelle Latham wrote in a court filing. “Leaving two human beings in the road alone, knowing the she struck them with her vehicle is callous…She did not stop to aid or give comfort to a dying or injured person because she was concerned about herself.”

After her jail time is complete, Holland won’t be able to get a driver license for three years and she will face 10 years of supervised probation, according to Angela Starke, spokeswoman for the State Attorney’s Office.