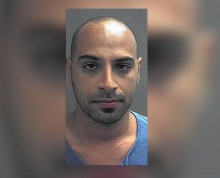 ORLANDO, FLORIDA —  Charges have been dropped against the Uber driver who was accused in September of putting his hand down his female passenger’s blouse.

Ramy Botros, 28, was charged by Orlando police with battery in the Sept. 19 incident.

According to the state attorney’s office, the case was dropped because the victim wasn’t cooperating and was not responding to requests for more information.

Orlando police told Local 6 she had a recording and that he said she was asking for it.

Barker said the case got picked up nationally and across the world and that Botros’ friends in Egypt were calling him about it.

“Time heals all wounds and as this goes along, it’ll get better but you Google his name, what’s going to come up? This is going to come up so this still hurts him if he is looking for new employment, obviously he lost his job as a driver and now has to rely on just selling his music,” said Barker.

Botros has since moved out of Florida. Despite Botros’ battery charge being dropped, Uber says he has been permanently deactivated.