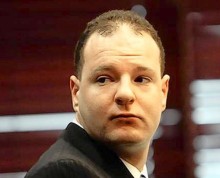 Craig Sandhaus says his former lawyer had a conflict of interest — his brother, Eric.

After his brother was accused of stabbing a downtown Orlando bouncer in May 2011, Craig Sandhaus turned himself in, confessing that he was the one who fatally injured Milton Torres.

Now, Sandhaus wants that confession thrown out of his second-degree murder case. His defense argues that the lawyer who represented him at the time had a conflict of interest — because the attorney was also representing his brother.

Sandhaus, 28, also wants Circuit Judge Alan Apte to suppress his testimony from an unsuccessful “stand your ground” hearing last year, during which Sandhaus said he stabbed Torres to protect his brother, Eric.

Torres, 25, was stabbed during a brawl with the Sandhaus brothers outside The Lodge bar on May 7, 2011. The fight started after bouncers tried to remove the brothers from the bar, police said.

Police initially arrested Eric Sandhaus in the stabbing, but he was let go after Craig Sandhaus confessed.

Craig Sandhaus’ new lawyer, Eric Barker, argues the confession only happened because his previous attorney, Eric Schwartzreich, “had an unwaivable conflict of interest.”

Barker’s new motion says his predecessor “had Craig confess to the murder so that Eric could be released from jail.”

“This is the most basic and obvious conflict of interest where one client is blaming the other client in order to exonerate himself but to the obvious detriment of the other,” Barker’s motion argues.

Barker also argues Schwartzreich failed to prepare Craig Sandhaus to testify at his “stand your ground” hearing. Schwartzreich declined to comment on Tuesday.

Apte has set a hearing for May 3 to address the motion. Trial in the case is set for May 20.